To use or not to use trekking poles during ultramarathon running?

There is an ongoing debate about whether to use trekking poles during ultramarathon running or not. The proponents of using poles argue for instance that poles are beneficial as they:

1) offer relief of knees and quads in particular when going downhill;
2) improve posture and help propel the motion going uphill;
3) help eliminate hand swelling in long races;
4) increase balance and stability on technical trails (in particular if you have a tendency for vertigo);
5) help disburse weight when running with a backpack;
6) aid in water crossings; and
7) establish and maintain a natural rhythm/cadence for forward motion.

The opponents of using poles argue on the other hand for instance that poles:

1) increase use of mental energy as they require focus to not drop and where to put and place;
2) is a safety risk when you fall;
3) lead to abrasion of hand grips and require you to wear gloves;
4) is a hassle as your hands are not free;
5) adds to the weight you need to carry during the race;
6) increase total energy expenditure during the race as you have to carry more weight and use your arms and upper body more during running; and
7) is for old people and wimps.

Looking into the scientific literature about poles there is again no clear good studies to convincingly show benefits for a race such as TDG or UTMB. Nevertheless, there is clearly no studies showing that using them would be harmful and there are a number of studies indicating possible benefits.

In an interesting study by Howatson and colleagues 37 volunteers made the ascent and descent of Mount Snowdon with a day pack having either poles or no poles. The group having poles had significantly less rating of perceived exertion (RPE) during the ascent, showed attenuation of reductions in maximal voluntary contraction immediately after and 24 and 48 h after the trek, delayed onset muscle soreness (DOMS) was significantly lower at 24 and 48 h after the trek, and creatinine kinase (CK) was also lower at 24 h after the trek (Howatson et al. Sci Sports Exerc 2011; 43: 140-5).

Another study by Bohne and Abendroth-Smith of 15 experienced hikers carrying varying loads going downhill showed a reduction of the sagittal plane moment at the ankle, knee and hip joints in the lower extremity with pole use. Reductions were also observed in the peak power absorption for the ankle and knee. These results held true across pack load conditions (Bohne & Abendroth-Smith Med Sci Sports Exerc 2007; 39:177-83). The reductions in the joint forces is supported also in studies by Schwameder and colleagues in downhill (25% decline) movement (J Sports Sci 1999; 17:969-78) and Willson and colleages, where also the use of poles enabled subjects to walk at a faster speed with reduced vertical ground reaction forces, vertical knee joint reaction forces, and reduction in the knee extensor angular impulse and support moment (Willson et al. Med Sci Sports Exerc. 2001; 33:142-7).

A study by Saunders and colleagues showed increased energy production (V02 and heart rate [HR])  in 14 hikers when wearing poles during a hilly course without any increase in RPE (Saunders et al. J Strength Cond Res. 2008; 22: 1468-74). Opposite results were found by Foissac and colleagues when 11 subjects were walking at a fast pace uphill on a treadmill inclined at 20% degrees. In this study no increase in VO2 max with poles weighing 360 grams could be observed. In this study there was however a marked redistribution of muscle recruitment as poles significantly reduced lower limb muscle aEMG values by about 15% and increased upper limb muscle aEMG values by about 95%, mainly due to more activity in the biceps brachii and anterior deltoid (Foissac et al. Med Sci Sports Exerc. 2008; 40:1117-25). Another uphill treadmill study showed a small increase in heart rate with poles, but alleviated some stress from the lower extremities leading to lower stride lengths and lower RPE (Knight and Caldwell Med Sci Sports Exerc. 2000; 32:2093-2101). Yet other studies showed neither no increase in HR nor energy expenditure with poles, but a lower RPE (Jacobson & Wright Percept Motor Skills 1998; 87: 435-438; Jacobson et al. Int J Sports Med 2000; 21: 356-359). A relatively recent study comparing energy expenditure during walking with poles either uphill, level or downhill at a treadmill in 12 volunteers found that the use of hiking poles appeared to increase energy cost (EC) , V02 and ventilator response (VE) only during downhill walking (Perrey & Fabre J Sport Sci Med 2008; 7: 32-38). This study found no effect of poles on HR.

In summary these results indicate that using poles might be beneficial both during the race and afterwards in particular for uphill terrain, but that the energy expenditure might be increased during downhill running with poles. Not surprisingly, however, a study of 15 volunteers showed an increase in balance when using two hiking sticks compared to one and that using one stick was superior to using none (Jacobson et al. Percept Mot Skills 1997; 85:347-50) and this might be important when running downhill in technical terrain. More studies are clearly needed in this area.

I have been using poles for some of my runs, and for me they are indispensable for longer technical runs like TDG. I use them more for uphill terrain than downhill, even though I appreciate the support during technical downhill when I cannot run that fast. I am currently using Black Diamonds Ultra Distance Carbon Poles as they are both light (265 grams for a pair of 110 cm long poles) and sturdy (being made in Carbon). There are lighter poles available from Raidlight (Trail Poles 240 grams for a pair of 110 cm long poles) and Mountain King (Trail Blaze 230 grams for 110 cm long poles), but they are or at least appear less stable as they are made in alloy. Leki Traveller Carbon poles has the advantage of having a continuously variable length between 90-130 cm and they are also sturdy, but the heavier weight (338 gram per pair) made me choose the Ultra Distance Poles.  The drawback with the Ultra Distance poles is that you need to settle for a fixed length and I have chosen quite short ones as I use them mainly for uphill running, but they are very light and quickly foldable if not used. So, my personal answer to the question to use poles or not is certainly yes for a race like TDG. 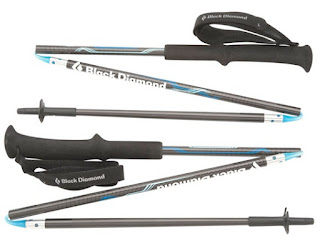 I am continously searching for new studies on the use of trekking poles for running and I will update the blog continously with new posts linked here:
http://summitrun.blogspot.se/2013/11/use-trekking-poles-to-save-your-feet.html
Upplagd av Peter Hjelmstrom kl. 9:55 PM


A blog primarily about mountain ultramarathon trail running and endurance training and competition at high altitudes in mountain terrain. The blog is rather technical with a medical and scientific focus and is written by a 42-year old runner living in Uppsala in Sweden who finished Tor des Géants (TDG) in 2013 and Petite Trotte à Léon (PTL) in 2014. The goals for 2015 include some shorter more technical skyrunning races in the Alps.